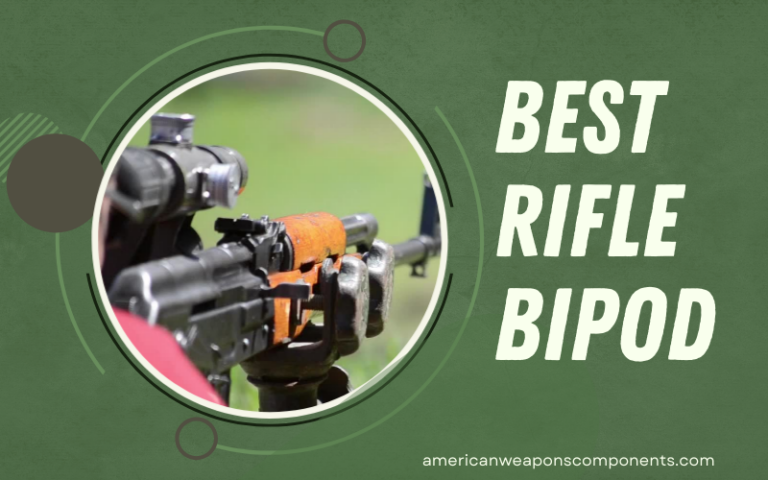 Finding the right rifle bipod can be challenging.

Believe it or not, there are a lot of factors​ to consider when looking for the best rifle bipod

It’s our job to narrow it down, so that’s what we’ve done with this article about the best rifle bipod reviews.

We’ve narrowed down the best bipods to own for your rifle down to the top 5 bipods. Yes, there are plenty of other rifle bipods that would do the job just fine, but in our testing and rifle bipod reviews, we found these to be the top bipods in 2017.

Often considered a tactical accessory, bipods were historically only used by military and law enforcement personnel to steady their firearm, preventing fatigue and increasing accuracy.

Bipods have become very popular with target shooters and hunters and it is not uncommon to see the likes of a .22lr or a .308 mounted on one.

Shooting sticks allow the shooter to easily rest their firearm on uneven surfaces such as the ground or a large rock which prevents the user from getting tired and increases the ability to shoot accurately, especially at long distances.

Most guys at the range will use a bipod for practicing shooting from the prone position or even to provide stability when sitting if the range is set up with proper benches.

The purpose of this post is to provide you with an overview of bipods and their uses as well as information for mounting your bipod to your rifle. I will follow with a review of the best rifle bipods to allow you to make the decision on which one to buy.

Obviously there is a military and tactical use for rifle bipods however that is outside the scope of this post. I want to provide the average hunter or shooter with some of the most common uses for bipods.

I encourage the use of a bipod when sighting in your rifle because it will provide the absolute best stability and will prevent human error when zeroing your scope. It will help you fine tune the windage and elevation on your scope so that you can be more confident when shooting at a distance. A more confident and accurate shot will help you bring home meat for your family!

Hunting requires precision and the ability to repeat the same shot over and over. Whether you get the opportunity to shoot from a prone position when hunting or need to rest your rifle on a fallen tree, a bipod can be your friend during a successful hunt.

Something that I will caution you on is the additional weight that your standard bipod will add to your rifle setup.

Most guys will already have a scope mounted on the rifle and by adding shooting sticks you are adding to the overall weight which can be an issue especially if you are hiking long distances when hunting. That added weight may not be great.

One way to have more fun at the shooting range is with a bipod. The bipod will prevent you from getting tired and will allow you to group your 30-06, for example, a heck of a lot tighter than without one.

It doesn’t matter what kind of rifle you have, whether it be a centerfire or rimfire, a bipod can easily be mounted to your firearm.

Long range or tactical shooters will use a bipod when shooting at long distances such as 1000 yards and during competitive shooting.

Mounting your bipod to your rifle is a very easy process. Depending on which bipod you purchase and what rifle you have, the process should take just a few minutes.

Some bipods simply mount to the sling stud that most rifles already have however if you don’t have a stud, you can get a gunsmith to put one in for very little money without the risk of damaging your rifle by doing it yourself.

If you are worried that by mounting a bipod to the existing sling stud will prevent you from using your sling, don’t worry. Most bipods will allow you to attach your sling directly to the shooting stick.

Other bipods require a small piece of rail to be attached to your stock for mounting. Rail mounting allows you to quickly attach and detach the bipod from the stock whereas if it is mounted using a sling stud it will require you to manually unscrew it before you can detach it.

Amazon is a great place to purchase rifle bipods because they are typically at least 20-30% cheaper than your traditional Bass Pro of Cabela’s. Do your research! Check Amazon and compare it to other stores so that you can find the best deal.

If you have done any research on the best rifle bipods, you will have come across products from Harris. Harris provides some of the best bipods for the money and and are quick detachable and clamp to the sling swivel stud already installed on most rifle stocks. If you don’t have a sling stud, you have a few options. You can take your rifle to a gunsmith and have them install it, you can install the stud yourself, or you can purchase a special adapter to mount your bipod. These adapters come in different shapes and sizes depending on which rifle you are mounting it to.

Harris is known for building high quality and reliable professional grade bipods at a great price point. Sure, you can spend $250 or more on a bipod however you don’t have to. This Harris bipod is adjustable from 6″ to 9″ giving you added versatility under different shooting conditions. It also comes in a 9″ to 13″ model if you are looking for higher profile shooting sticks.

The Harris bipod also has the swivel action which allows the shooter to tilt the rifle 45 degrees each side to compensate for uneven ground. The “BRM” stands for Bench Rest Model and the “S” stands for swivel.

UTG (Leapers Inc.) builds inexpensive but relatively decent quality bipods that will make your tactical rifle look great. Made out of durable aluminum construction with a steel top platform, the UTG Tactical Bipod includes both the Picatinny style mount as well as the swivel stud mounts. It has foldable and extendable spring loaded legs with 2 different locking systems. Great for your AR 15 setup!

This is a good bipod however it won’t be as durable as a Harris or Atlas bipod. If you are a light user and want to purchase a decent bipod at a great price to make your rifle look good while adding accuracy, the UTG bipod is for you. If you are using the bipod a lot and it needs to withstand harsh conditions and abuse, the UTG Tactical OP bipod probably won’t last you as long as you want.

-Both Picatinny and swivel stud mount

You probably haven’t heard the name, but the Ohuhu bipod is heavy duty and made out of hardened steel and aluminum with 5 adjustable leg settings with return springs. It is adjustable with leg height from 6″ to 9″ and the legs can be folded either forwards or backwards. Why is this bipod so cheap? It is fixed so it doesn’t have either the ability to swivel and doesn’t tilt side to side so the construction is quite simple.

If all you are looking for is stability when shooting and you don’t have a large budget, the Ohuhu 6″ to 9″ bipod is a good choice. It is solid and durable for those of you that plan on having this guy ride around in the back of your pickup.

The UTG Swat/Combat shooting sticks are easily mounted to any picatinny style or swivel style rifle for added convenience and versatility.

These shooting sticks are different from the other bipods reviewed because these are meant for standing while shooting and adjustable from 24″ to 61″. The Primos Trigger Stick bipod is adjustable with one hand so that you can easily adjust the height to fit your needs. Note that the top of the trigger stick is shaped like a V so it can be fitted to virtually any rifle. This does not require a picattiny or a swivel stud mount and your rifle will just rest on the shooting sticks.

-V shaped, does not mound to rifle

Siting though dozens of bipods to find the best rifle bipod can be overwhelming. Hopefully you found our research and bipod reviews of the top rifle bipods for the money to be beneficial.

Rifle scope bipods are a great rifle accessory that can be inexpensive but produce great results. They prevent you from getting tired holding your rifle and add to your ability to shoot accurately at long distances.

Hands down, the best rifle bipod is the Harris S-BRM hinged bipod. Its swivel action and adjust-ability is best in class and for the money this bipod is a good purchase.

Stay safe and happy shooting! You need to check out the best gun safe reviews here!