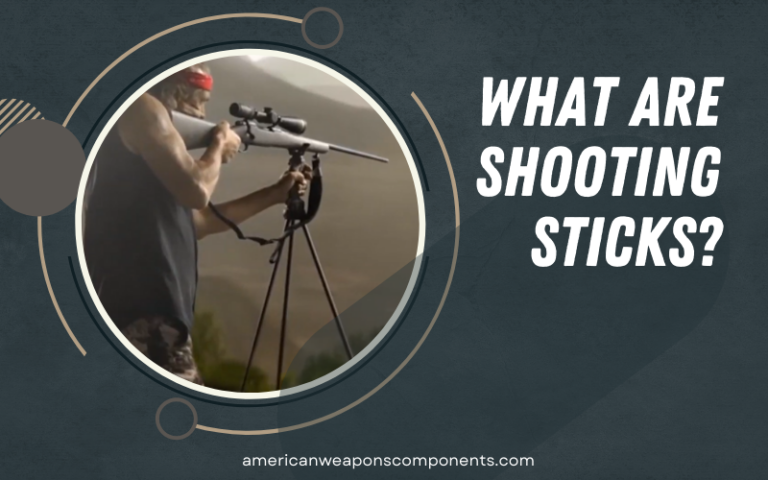 There are many gun accessories out on the market for you now a days. Some are more popular than others. Some come highly recommended by many, while others not so much. Some you may not know what they actually are suppose to do. There are many accessories to choose from and a lot out there to research.

One accessory that you have the option of going with is a shooting stick. What are shooting sticks you may ask? Do you need one? Should you want one?

Let us explore the ins and out of shooting sticks and where they might fit in the gun world.

So many questions, and so many answers:

What Are Shooting Sticks:

The first basic, and most important question is what are shooting sticks? Shooting sticks simply put are portable weapon mounts. They are much like a tripod that holds a camera, however they hold a gun.

Why Do People Use A Shooting Stick?

One could list several reasons for using a shooting sticks. When it comes down to it though, most people who use them, use them for one main reason: to support their gun to improve accuracy.

You will hear over and over, that in order to have great, accurate shots – whether at a target, the enemy, or a deer while hunting, you need to hold your gun steady and stable. A shooting sticks purpose is to create a quick, steady spot for your gun to rest on.

Who Uses Shooting Sticks? Do I Need One?

Shooting sticks are most commonly used by hunters, and soldiers. With shooting sticks they are able to shoot their prey or their enemy at much farther distances, due to the steadiness of their shot when using them.

When your read about shooting sticks, you will most often seen them discussed when it comes to hunting though. While out in the jungle or in the woods, your options for a secure rest may be limited, which is where shooting sticks come into play. If you are someone who plans on hunting a lot, shooting sticks are great option for you.

If you are going to the range and want to do some long-range shooting you may also appreciate a shooting stick, however they are not necessary by any means. Often times a range will have some form of rest for your to get your gun steady with.

Are There Different Kinds Of Shooting Sticks? What Is The Best Option For You?

Now that you know what shooting sticks are, and why the benefits of using one, let’s discuss the types of sticks out there. There are several type of shooting sticks you can choose from.

Note: The more legs you have on your shooting stick the more stable they are going to be. The trade-off will be that they take more time to set up and they are heavier.

If you are hunting in an area that is very uneven, where you will be on the go a lot, or are taking quick shots, then a Monopod shooting stick is probably the best for you. Remember though, that this style of walking stick is going to be the least stable of the group.

If you are doing a lot of long distance shooting then the Tripod shooting stick is a great option for you. It is the most stable style of the shooting sticks. If you have the time to set it up, it will be a great addition to your hunting trip.

Bipod shooting sticks are usually used by hunters who want more stability than a monopod, but do not want to carry around a bulkier tripod, that will take a longer time to set up. Bipods are a great compromise between the monopod and the tripod.

Note: Hunters who want a little quicker set-up time, and do not mind the extra bulk on their gun, often times go for the rifle mounted bipod versus a freestanding one.

How Much Do Shooting Sticks Cost?

Like with anything, shooting sticks can range in cost depending on quality, style, brand, and so on and so forth. You can find new shooting sticks ranging from $20 to hundreds of dollars. No matter what, you should be able to find something affordable that will benefit you.

What Are Common Brands Of Shooting Sticks?

There are many different types of brands when it comes to shooting sticks. Some of the more popular ones though include Primo’s, Vanguard, Hammers, Bog pod, Stoney point, and Harris.

Now that you know what are shooting sticks and the details of them, you are ready to make an informed decision. You can now choose if this is something that fits in your gun world, with your guns and accessories.