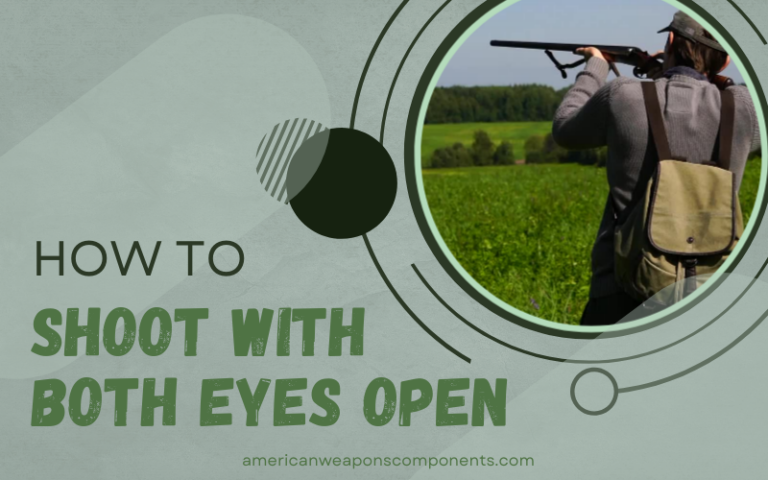 Is shooting with one eye the way to go, or am I in fact suppose to know how to shoot with both eyes open?

Shooting With One Eye

Where did the idea of shooting with one eye come from, then?

Many believe it became popular when lessons and expert advice were not readily available.

A father shot with one eye open, so he taught his son the same way. And so on, and so forth,

However, experts and teachers over time have come to agree that two eyes are in fact, better than one.

However, before the HOW, you should probably understand the WHY.

Why Shoot With Both Eyes Open?

Why do so many people believe shooting with both eyes open is the best? There are many factors that come into play.

When you close one eye, the other eye has to to work harder, causing eye fatigue and in turn, facial fatigue to set in quicker.

Your neck and the rest of your body also tires faster. This leads to distraction and body malfunctioning, which leads to inaccurate shooting.

With both eyes open you can use your peripheral vision, allowing you to be more aware of your surroundings.

In a gun range this may not be critical, but out on the battlefield or even during a home invasion, peripheral vision could be imperative for survival.

Closing one eye takes some sort of maintenance on your brains behalf. This causes extra strain on the brain.

Contracting your muscles to keep your one eye closed, makes it so your brain has to now divide its attention between maintaining its closure, and everything else you need to do to get the shot off. More simply put: it’s distracting.

Using both eyes allows more light to enter your eyes, thus allowing you to see a situation more clearly. Often times a threat will occur when the lighting is not perfect.

By using both eyes you can see much better, allowing for more details and information about the situation to be taken in, which could mean the difference between life and death.

In a fight or flight situation, medical experts state it is natural for both eyes to be wide open.

If this is true, wouldn’t you want to learn to shoot in the same conditions?

The answer is yes.

If you naturally are going to have both eyes open in an intense situation, then learning to use your gun accurately with both eyes open just makes sense.

Two eyes offers less fatigue and distraction, and clearer vision. All good things to have in a survival situation. Shooting with both eyes open is the better way to go.

This at least is the mantra for many experts, soldiers, and trainers a like.

The key is to retrain your body into doing this, or if you are a beginner, making sure you know how to do it from the get go.

How To Shoot With Both Eyes Open – 6 Tips:

Tip 1: Learn which eye is your dominant eye.

Learning which eye is dominant allows you know which eye is the most natural for you to use. Going with what is natural, will make shooting a lot more comfortable.

Your dominate eye will be the one you aim with; it will be the eye you use to look through your sights with.

How do you determine your eye dominance? Simple!

Once you know your dominate eye, you can then attempt tip number 2.

Tip 2: Use an eye shield or put frosted tape over your non-dominant eye.

This blocks your non-dominant eye, making it so double vision does not occur (something people often complain about when using the two eye technique), while maintaining the advantage of the peripheral vision you have with both eyes open.

You can also use an eye shield, which professional shooters will often use.

When you first start trying to shoot with both eyes open, try squinting your non-dominate eye.

This may help you fight off some of the urge to close it completely, while also allowing you to practice keeping it open.

Dry fire refers to when you are practicing with your gun, but NO ammo.

It will train your eyes to stay open once you hit the range with actual ammo.

Tip 5: Consciously tell yourself to keep both eyes open.

This might seem too simple or to obvious, but sometimes the simplest things work the best.

You may need to go to the range on many occasions purely to practice keeping both eyes open will repeating in your head over and over again to do so.

As with anything, practice makes perfect. Practice these tips over and over again until shooting with both eyes becomes natural.

As with anything, anything worth learning, is definitely worth practicing.

Final Thoughts – ​How To Shoot With Both Eyes Open

Learning how to shoot with both eyes open can be tricky. It may not be a walk in the park at first, but over time with due diligence, and following these simple tips, it should become easier and easier.