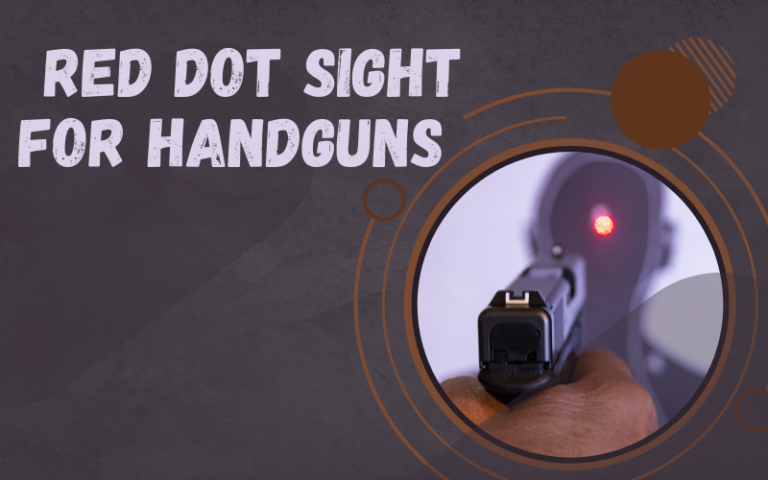 Have you ever considered getting a red dot site for your handgun? If not, you probably should. Especially for home defense.
Red dot sights are gaining a lot of popularity and even Military.com thinks that red dot optics may soon eclipse traditional iron sights in handguns.
Standard iron sights aren’t going anywhere, but as both laser sights and red dot sights are getting smaller and more effective, handguns are becoming more and more effective.
Red dot sights are extremely accurate and shooters are able to put their aim on the target much faster. Originally used and created for tactical rifles, like the AR-15, AR-15 red dot sights were meant to make target acquisition easier and shooting more accurately, so why not on a handgun too?

Why use a red dot sight for handgun?

Red dot sights is are meant to compliment your handgun. Competition shooters and those who utilize weapons for self-defense are quickly catching on to the benefits of using a red dot sight on their handgun.
For home defense specifically, getting a red dot sight is perfect because criminals often attack in low light conditions at night.
Also, if you are using your handgun at the range for target shooting, you’ll likely notice a huge difference in your accuracy when hitting the target when using a red dot sight versus the iron sights.
To fit on a handgun, red dot sights are typically made much smaller and are sometimes referred to as ‘miniature red dot sights.’ Because of the smaller size, they use a very simple reticle. As a matter of fact, it’s pretty common to find a red dot sight that is just 1.2 ounces in weight.
Sure, they add some bulk, but you’ll barely be able to tell a difference in weight.

So, what is the best red dot sight for a handgun?

The answer really depends on what you plan to use it for. For this article, let’s focus on the use of a handgun for home defense. For home defense, there are a few factors to consider:

1. Fast Target Acquisition
Like I stated earlier, this is one of the biggest benefits of using a red dot sight in general, but not all red dot sights are created equal.
Red dot sights are all different and it really just depends on personal preference for some of the features. They come in different shapes and colors, as well as different got sizes and brightness levels. You might find a red dot sight that comes in green, instead of red, for example. The main thing here is that you need to find one that allows you to find your target the quickest, since time is a huge factor when it comes to home defense.
Another things to consider is the size of the dot. A larger dot might be too big and actually interfere with the way you find your target through the sight. At the same time, larger dots are better for up close shooting because it is easier to get the dot on the target.
Smaller red dots allow for a more accurate shooting at longer ranges. Long range is usually referred to at 25 yards and even with a larger red dot reticle, hitting a man sized target is much easier with a red dot sight.
2. Ability To Use in Low-light
Brightness of the dot is another thing to consider, as light brightnesses vary between different red dot sights. Since criminals primarily attack at night, get a red dot sight that has a lot of brightness so that you can see what you are aiming at.
Make sure the illumination isn’t so high though that your eyes can’t see past the dot. The idea is that you can see the dot AND the target through the sight for a precise shot.
In low light, whether it be in a dark room or at night or early morning, a red dot sight is even easier to see than a handgun night sight. What’s nice too is that the red dot can still work in bright light situations.
Some red dots sights are equipped with light sensors that can adjust the brightness automatically, which is perfect for transitioning from low light to bright situations.
3. Ease of use and efficiency
For a home defense handgun, look for a red dot sight that is very durable. You also want the option of retaining the handgun’s iron sights. A weapon designed for combat and home defense needs an optic that you can trust. If it’s going to break easily, your life won’t be able to depend on it when it’s most critically needed.
This is where choosing a reputable company is also extremely important, like Bushnell, Vortex, Burris, or Trijicon. You know that if you buy from a great company that the optic will be made well and something you can count on.
If you have poor eyesight, the red dots are easier to find than the iron sights and allow those who have poor vision to still be very effective with a handgun.
4. Concealed or not?
Some red dot sights are bulkier than others and it may be more difficult to conceal.
Luckily red dot sights are small and there are even special holsters that are made specifically to allow for the added bulk of a handgun sight.
Some red dot sights also offer a battery free miniature red dot sight that absorbs the light and turns it into the reticle or dot. This can help reduce the bulk as well.
But if you use a battery, that’s ok, as this is primarily the way most red dot sights operate. Just be sure to know its battery life and when all else fails, use the backup iron sights.

Though there are some very positive things about red dot sights for your handgun, there are also some things to consider.
Red dot sights are usually more expensive. For home defense, I wouldn’t recommend getting anything under $100. Your life depends on using a reliable red dot sight for home defense. You may no want to be cheap.
Another thing to consider is that since most red dot sights rely on batteries, this can be an added hassle of worrying about the battery life of the optic.
For some, the extra bulk of the sight on a concealed pistol is something to consider as well.
Also, someone who is only used to traditional iron sights will take some time to use a red dot sight effectively, so there will be a little bit more time spent on learning how to use the optic.

For home defense, red dot sights have huge advantages.
Some of the benefits include fast target acquisition, easier to shoot at longer distances, more accurate and efficient aiming, can see the targets in low light conditions, a great compliment to any handgun.
In the end, though a red dot sight can never replace skill or talent, it will  help aid your skill and may mean the difference between life and death.
What do you think of red dot sights? Would you consider getting one for your handgun for home defense?