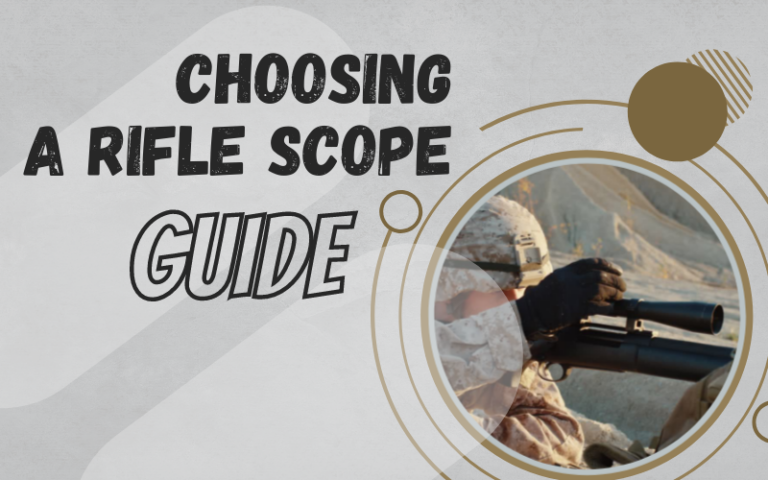 Long range shooting can be extremely difficult. It’s something that most shooters need to work on consistently to get good at and acquire the skill.

The skill needed to make a long range shot is not one that you can just merely replace with equipment (though the right long range scope can definitely aid you). Long range skills are built over time.

But having the right equipment can make a difference and aid you in your long range shooting. Some of this proper equipment includes:

I’ve written an article describing the best long range scopes in general and the best budget long range rifle scopes for the money. But today we are going to go over how to choose the right reticle for your long range shooting.

​Sure, long range shooting can be done without using a long range optic, but those that can actually hit a target at 700+ yards with only their iron sights are few and far between.

Most of us need a scope and are likely going to use a scope.​ A long range optic is always going to be more  precise than iron sights.

What’s interesting to consider as well is that most people define long range as a fixed distance. Realistically, long range is considered anything past 500 yards and most people put true long range shooing at 1,000 yards or more.

But if you’re new or your long range skills need some work, even 100 yards might seem like an impossible distance. Keep practicing, you’ll get it.​ A long range scope will help your comfort level grows and your skill improves.

There are a lot of factors when determining the best long range scope to choose for long range shooting, and one of the most important things to consider is the reticle.

What Is A Reticle? 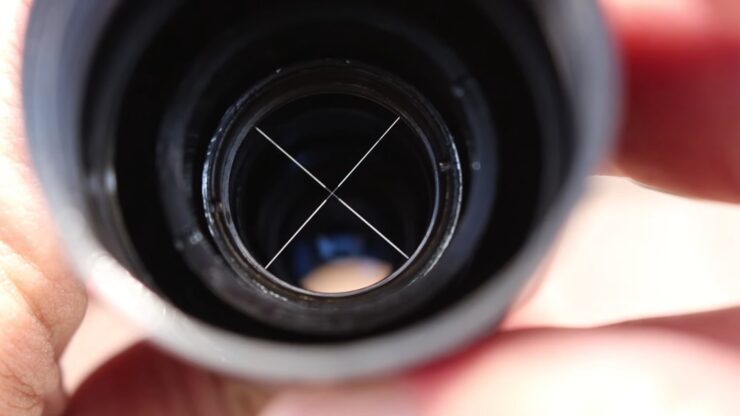 Reticles are most commonly known as crosshairs. A reticle is an extremely important component on a scope, especially a long range scope as it is used to measure or help in locating how far the object you are shooting is.

​A reticle is a series of lines that you will see as you look through the eyepiece of a long range scope.

The above example is of a reticle found on the Leupold VX-2. This is a BDC duplex or plex scope reticle. Notice the 2 dots? These dots represent aiming points for different distances.

Scopes have become the normal for most hunters and other shooters and all scopes need to provide an aiming point for a more accurate shot. Most scopes use a reticle for the job.

Let’s take a look at some different reticles and what they’re good for, but before we do that there area  couple of different types of long range shooting to consider

Each rifle optic has a different reticle because each scope is made to be used for different circumstances. There are a couple different types of long range shooting to consider that will determine what kind of long range scope and reticle you should choose: 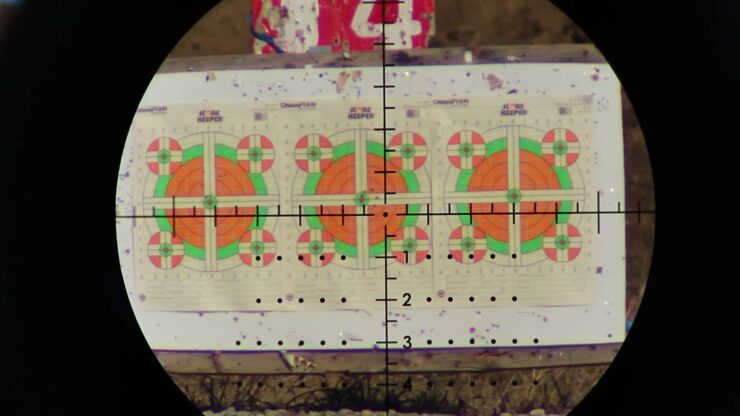 Target shooting is based all on precision and accuracy. You have to be capable of hitting a very small target from a seated position, off of a rest.

The time to hit the target isn’t a critical component because the target isn’t moving. This makes it easier to shoot at longer distances. Serious long range target shooting can be done at 600 to 1000+ yards.

However, long range target shooters still have to consider the wind if it is blowing. There is also the need to compensate for the drop of the bullet over the distance.

The reason a typical max long range hunting distance is at the 300 yard mark is because a hunter must make sure that his/her shot counts because they are shooting at a live animal that will run away as soon as it hears the shot fired.

A hunter should know the distance at which they can strike a target and do so in a humane manner that kills an animal quickly and efficiently.

Reticle choice for a hunter is critical in a hitting a moving target. Hunters will also have to make the shot much quicker than target shooters, so they need to get on target rapidly.

Types of Reticles and Their Uses

Now that we’ve covered the different types of shooting, now let’s get into the various types of reticles we are going to cover in this article: 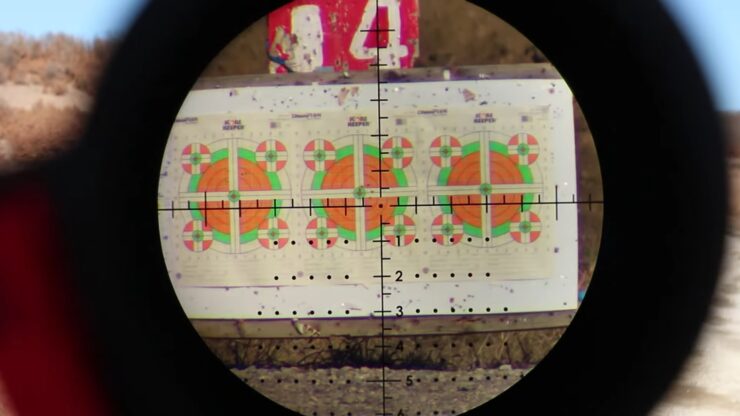 A plain crosshair was the only choice of reticle anyone could get for many many years. Its simple arrangement of two intersecting lines creates an aiming point in the center.

Simple is often the best approach.

​Should mainly be used for target shooting in order to help with your aim. You can also use a plain reticle to help with with other skills like breath control and work on decreasing your movement.

It’s not the best choice for hunting because the fine hairs can often be tough to see when using the scope in low light or trying to aim in a hurry.

Making the lines darker will only make the central aiming point less precise.

The duplex reticle is the very best all-around reticles for hunting. It usually has heavy lines that will naturally stand out and catch the eye and direct the center of the scope.

Where the two lines cross in the center are the finer lines which provide an aiming point that is precise enough for proper placement. These fine lines also don’t obscure the target being sighted.

Most (if not all) scope manufacturers have made scopes with duplex, or plex, reticles.

They are often called “[something] plex,” due to each maker wanting to give a different and branded name to their version of a duplex reticle.

Great all-around use. Can be used for target shooting and for hunting. A duplex scope is especially good for hunting as it allows the hunter to easily center the target on the reticle with the thicker lines while still being able to get an accurate shot and not obscure the target with the finer lines. 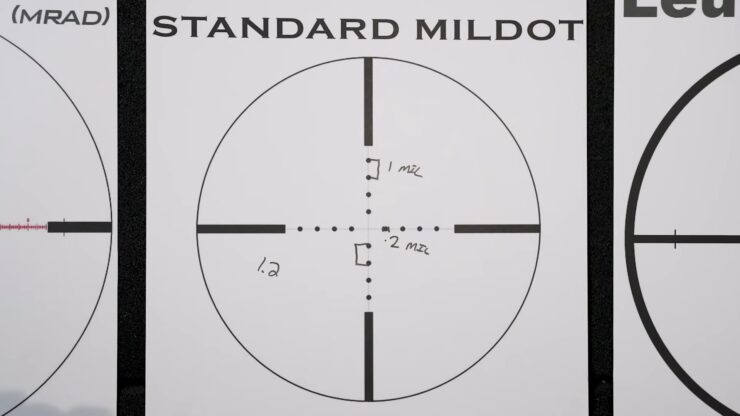 The MIL dot reticle is great for long range shooting if you’re willing to put the work in. With enough study and practice is can be used to produce very accurate shooting, but it is definitely not for everyone.

The MIL dot reticle features a series of dots or hash marks, spaced one MIL apart. A MIL is a unit of measurement that simply represents distance. This allows the shooter to calculate the distance to an object of known height or width.

Ok, ready for some math?

For example: Take a 6 foot tall deer (2 yards tall). Let’s say that the top of the head lines up with one MIL dot and the front feet line up at 4 MIL dots down. So:

This same technique can be used to estimate the lead on a moving target or compensate for windage.

To use a MIL dot reticle effectively, all you need to remember is that the distance between the dot centers is 36 inches at 1,000 yards.

With this in mind you can dial the scope in for proper elevation OR use the dots to hold over the proper amount.

Using a MIL dot scope is a complex operation and requires a lot of studying and practice. Though not for everyone due to its complexity, for serious long range shooters and snipers, it can be very useful.

MIL dot reticles are meant to be used for extremely accurate long range shooting. While not practical for most shooters in most hunting and target shooting situations, the MIL dot can be used by well-practiced shooters and snipers.

Since it will take a while to master, it’s best to practice using a MIL dot scope for target shooting at first. Once you get great at it and really understand it, ​you can evolve your skill set into hunting and shooting moving objects.

Range finding scope reticles are used to estimate the range to a target. It can also be used as a conventional scope.

The crosshairs have fine lines and the dots in the center are usually black and small. This can make it difficult to sight a target using only the black dot if the target happens to be dark, as most targets are.

Yes, this is a little bit better of a reticle than the plain crosshairs.

One of the biggest setbacks for buying a rifle scope with a rangefinder built-in is that the scope is generally much heavier and bulkier than your average long range scope. They are generally much more expensive.

Due to the fine crosshairs and the dot that is usually difficult to see, this scope shouldn’t be widely used for hunting. Determining the range of the game is not necessary for most rifles in most hunting situations and can be more easily and accurately measured used a laser rangefinder.

BDC stands for Bullet Drop Compensation. BDC reticles are capable of giving you a true point of aim for a known distance to compensate for bullet drop.

The BDC reticle can be simple and basic with only a few dots or lines on the 6 o’clock crosshair.

BDC reticles can get more complex as well with especially distanced markings along both the 3 and 6 o’clock crosshairs. They can even come with a ‘Christmas Tree’ style reticle design.

BDC reticles are very useful for long range hunters. You can validate the bullet drop when you are target shooting and then once you’ve got it figured out, use it for hunting.

Illuminated reticles are reticles that show the red light points. It allows for greater accuracy at in low light conditions.

Illuminated reticles are designed to illuminate different parts of the reticle. Depending on the design, they can illuminate the crosshair, the circle around the ocular filed or the dot in the center of aim.

Illuminated reticles also come in handy when targeting an object in a dark background that makes the crosshairs and MIL dots invisible.

The best scenario to use an illuminated reticle is for target shooting. Though it can also be used for hunting, here’s why I don’t recommend its use for your hunting scope.

Legal light use on a long range optic for most hunting is a half-hour before sunrise to a half-hour after sunset. Most rifle scopes (not including the cheapest and darkest glass scopes) are bright enough to see the vital areas and aiming points when hunting, even within several minutes after legal light fades.

Also, any illumination that is too bright will ruin your night vision. This forces shooters to concentrate on the lit-up crosshairs instead of the dim target.

When a reticle has too much light, the optic glows with so much reflection that shooting accurately becomes very difficult.​

Hopefully, you have a pretty good idea of what type of reticle you need if you are a long range shooter.

There are a lot of long range scopes. If you are a shooter on a budget looking for the best rifle scope for the money, or even just looking for a great long range optic, with so many rifle scopes out there, it’s hard to know which scopes are the best.

Hopefully, we were able to narrow it down for you! Good luck!​