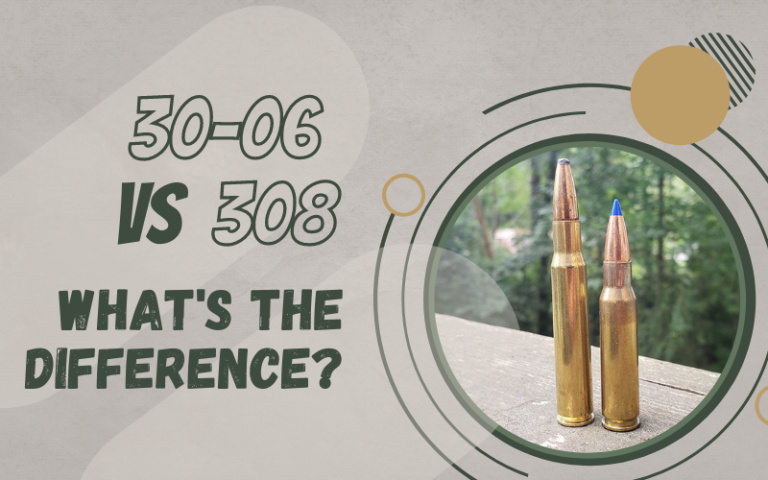 A debate that has been fought for around 50 years, which round to choose? The 30-06 vs .308 cartridge battle has been fought for a long time and it largely comes down to your personal preference and desires, but we will discuss the pros, cons, and everything in between here in this article.

The .308 was also used in a couple of different rifles. The first rifle this cartridge was used for the military in was the M14 which was also a magazine fed semi-automatic rifle. A variant of this rifle is still being used in the military, the Mk 14. Another variant of semi-automatic rifle that uses the .308 Winchester round is the AR-10, very similar to the ever-so-popular AR-15 chambered in 5.56x45mm NATO.

Even though these calibers, both the 30-06 vs 308, have been replaced in some respects by our military, they are still great calibers that can be used for a number of purposes.

What Are the Similarities and Purposes?

Both of these calibers have been used for a number of purposes, including military use, hunting medium to large game, and the usual target shooting. With the size of the round, they can take down most game in North America. Some claim that the only thing they can’t take down are some bigger bears.

In the military, both the 30-06 and the .308 were used in sniper positions. They are both great calibers for something like this, as they are both very accurate out to distances of 1000 yards. As you are going to see throughout this article, they are very similar cartridges with similar abilities.

Both the 30-06 vs .308 Winchester have been used in similar types of rifles as mentioned above in the background section.

The .308 Winchester round is slightly smaller than the 30-06, which the 30-06 casing being slightly longer. They both have around the same weight, usually around 140 to 180 grains.

With the similarities discussed with types of rifles above, there is one major difference with the 30-06 vs .308. The 30-06 is not used in modern semi-automatic platforms such as the AR-10. Seen as the .308 replaced the 30-06, the .308 is used in more modern platforms and the 30-06 is not. Both cartridges, however, have been used in bolt action, lever action and semi-automatic platforms.

Another difference between the two cartridges is something that really only applies to those who reload their own ammunition, but a difference nonetheless. There is a bit more room for powder in the 30-06 cartridge.

This means that if you are reloading 30-06 vs .308, you have a little more room if you want to give the round a bit more kick downrange. The more powder you add, the more force the bullet will hit with when it reaches its intended target. There are obvious danger that come from adding more powder than normal while reloading, but there is some wiggle room. With the .308, there just isn’t as much room for additional powder. This isn’t a huge appeal for most people, but it may be something that you want to look into when choosing between these two rounds.

Something else to keep in mind is the availability of different kinds of ammunition. While both .308 and 30-06 are readily available, there is more of a selection with the .308 Winchester. There are a lot of hunting rounds available for the 30-06, but the .308 is known for long range target shooting as well as hunting, so there is a pretty good selection of .308 premium type match ammo that could help you be much more accurate out at longer distances.

Which Round Should You Choose?

When talking about the 30-06 vs .308 Winchester, honestly, the choice really comes down to your personal preference and what you will be using the gun for. Each person is different in what they desire to do with a certain gun.

If you are an avid hunter, the 30-06 would be an excellent choice, as this is what it is mainly used for these days.

As for the .308, if you are looking for a hard hitting semi-automatic platform that could be useful at close range as well as at distance, the .308 in an AR-10 type platform might be ideal for you.

Both of these rounds are excellent choices for a rifle and both will make great weapons. Know that either round you choose, you will be getting one that will shoot well at almost any desirable range. Both of these rounds have great, fairly long histories in combat and hunting, so when debating between the two, the choice can be hard. We hope this article has helped bring you closer to the round that will fit you and what you want to do the best.