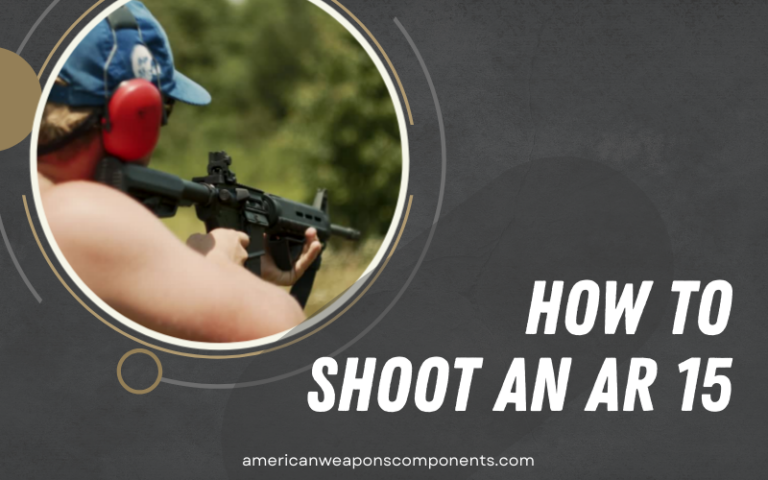 The AR-15 is one of the most popular rifles in the gun world today, and for good reason.

And all people, from beginners to pro shooters, are buying or building their own AR-15’s every day.

But do you actually know how to shoot an AR-15?

When it comes to shooting different types of guns, there is some sense of consistency.

If you know how to shoot one gun, you could argue you can shoot a different gun more easily.

That being said, just because you can shoot one gun does not make you an expert at other guns instantly.

For instance, an AR 15 is going to shoot A LOT differently than a revolver.

A lot of the principals and safety rules are the same, this is true. However, many of the tips and techniques for shooting well will be VASTLY different.

How to handle the gun, and just the feel when a shot goes off is going to be different.

An AR 15 is a very fun rifle to shoot, and when you get good at shooting one, it is even more fun.

The bulk of this article is going to discuss different tips on how to shoot an AR 15.

Before we get to that though, let us discuss some of the facts and basic information about an AR 15.

Quick Info about the AR-15

Knowing the basics about any gun can help you better prepare and anticipate how it will shoot. It will also help you determine changes in your own shooting style you may need to make before shooting.

Overall, any knowledge you have before shooting a gun is going to help you on the range.

They are lightweight, loud rifles that use magazines for holding bullets.

AR 15’s are often used for various types of hunting and target shooting .

Knowing how to shoot an AR 15 like the pros will definitely help make you a more skilled and accurate AR shooter.

Here are 7 great tips to help you learn how to shoot an AR 15 rifle.

If you want to become really good at shooting a rifle you will want to shoot the same rifle every time you go out to the range or hunting.

Getting to know your rifle, backwards and forwards will help you shoot better. Many great shooters have their FAVORITE gun that they shoot the best with, because it is super familiar to them.

The more familiar the rifle is, the easier it is going to be to shoot.

Different ammo, shoots differently. While it is good to be well versed in various types of ammo, if you really want to become a good shot, using the same ammo will help you.

Tip #2: Have a Consistent, Proper Stance

He breaks holding an AR rifle down to four basic, important parts:

Jerry explains that they key to shooting well is a consistent, strong shooting position. He believes you should practice your position over and over.

If you are having a bad shooting day, go back to your shooting stance and see what you are doing wrong. Often times making small adjustments can fix your bad day.

The position, mentioned above, is one he believes you use 95% of the time.

Tip #3: Have A Strong Rifle Hold

When learning the proper way to shoot an AR 15, having a strong V grip is important.

Make sure your supporting hand is gripping the handguards of the AR 15 about half way down the rifle.

Note: You want to make sure to have a strong hold on the rifle, but not too strong. If you are white knuckling your gun it could cause you to shake, which could impede your accuracy when shooting.

A good, healthy grip though can aid in accuracy if you do not go overboard.

One of the great things about an AR 15 is that you can upgrade many of the stock parts that come on it.

One of these parts is the trigger.

Many amateurs, or inexperienced shooters will just stick with the trigger that comes on their gun when they buy it.

Some shooters do not even know you can replace their trigger with a new one.

Having a good, reliable trigger can be critical when shooting.

Make sure to do your research and choose a trigger that is highly recommended, and that you feel is best for you.

Having the proper trigger will make your trigger pull much smoother, which is very important when shooting an AR rifle.

Learning how to shoot an AR 15 will be a lot easier if you follow through with your shot.

This means that when you shoot the rifle, you do not move, you do not flinch. You pull the trigger, let the bullet hit the target, and THEN you can move from your stance or go on to shoot another bullet.

Moving before the bullet hits the target or makes it down range, is NOT following through.

The more focused you are on your shot, the less movement you make, and the pause you take between shots makes a big difference in how well you will shoot.

For many following through seems like a basic and simple principle, but many do not actually practice it.

Even experienced shooters need to take the time to follow through.

It WILL make a difference.

Final Thoughts – How To Shoot An Ar-15

Shooting an AR 15 can be a lot of fun. It can be exhilarating. There is a reason it is an extremely popular gun among shooters.

Remember, the more you work at something, the better you will become.

By following and practicing these tips at the range you will learn how to shoot an AR 15 like the pros.