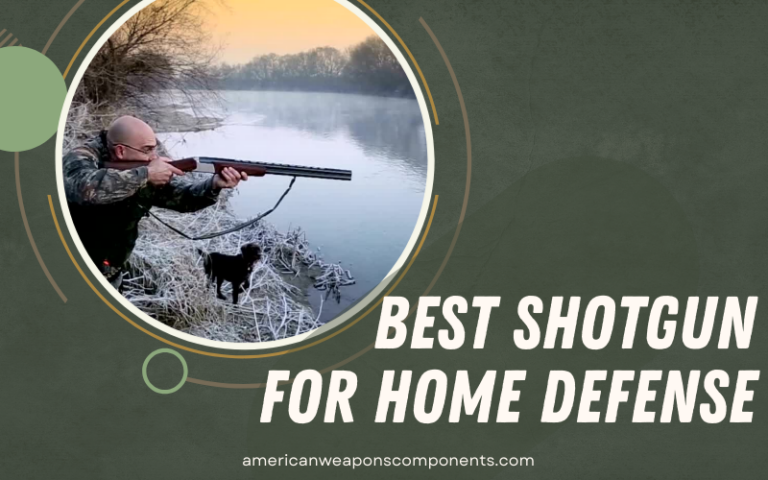 Shotguns come in a few different platforms themselves, each platform having a different action. There are double barrel shotguns, which can be over-under or side-by-side, pump shotguns where the user cycles the action themselves, and semi-automatic where the gun cycles itself using its recoil.

With so many different types of shotguns, what is the best shotgun for home defense?

For home defense, any shotgun (or any firearm for that matter) will be somewhat useful, but we think that the pump shotgun and the semi-automatic shotgun would be most helpful in a stressful, dangerous encounter with an intruder inside the home.

There are a lot of options out there with both of these kinds of shotguns, so we’ll go over them and tell you what our favorites are.

The shotgun is a great tool for home defense because of its reliability, easy methods of aiming, and its ability to take down threats without penetrating walls and possibly hurting others.

I’m not saying that shotgun projectiles won’t go through drywall, but they definitely have a better chance at being safe within the walls of your home when compared to some other firearms.

A pump action shotgun is probably where most people will begin their search for the perfect shotgun. Pump action shotguns have proved incredibly reliable and they are easy to operate with a little bit of practice and training.

When we talk about the different ways a shotgun is cycled, we are talking about the way in which an empty shell is ejected and a new shell is chambered, making the shotgun ready to be fired again.

The pump action shotgun is said to have been around since around the 1850’s, and have been largely popular since then.

These shotguns were used in many wars by U.S. troops, especially notable in World War 1 and World War 2 where they were used as “trench guns” for clearing trenches.

To me, the fact that these guns were used in World Wars to clear trenches proves them a very valuable self and home defense option. Clearing trenches involved close quarters encounters with enemies, much like those that would occur with a dangerous intruder in a hallway in your own home.

This brings me to a point I would like to nail down with everyone that reads this about the capabilities of the shotgun. You probably know this, but you will need to aim the shotgun at your target.

Some people have a false conception that if they have a shotgun for home defense, they just need to point the gun in the general vicinity of their target and do a little bit of “spray and pray”. This is most definitely false.

Whether you load your shotgun with bird shot, buck shot or a slug, you will need to aim directly at your target. At any regular distance inside a home, the spread of the pattern in both birdshot and buckshot will not be as wide as you think it may be.

Get out to the range and take some shots at 15 yards with buck shot. You will likely be surprised by the width of the spread.

Viable options for home defense might include shotguns like the Mossberg 500, Winchester SXP, or the Benelli Supernova. My personal favorite, however, is the Remington 870 and I highly recommend it.

The Remington 870 pump action shotgun is my personal favorite. I myself, have the 870 Express model in the black synthetic finish and I love it. I have had it for almost two years and have put probably somewhere between 2000 and 3000 rounds through it.

I have shot bird shot for the most part, but I have also shot quite a bit of buckshot and a few boxes of slugs through it. All of them have shot and cycled flawlessly (unless by user error).

The 870 has been around for almost 70 years now and has proven itself in many situations. I have personally used mine for hunting and have been pleased, but it is always close-by at home, in the event that I will need to use it to protect myself and those I love.

The 870 comes in many different shapes and sizes. There are quite a few tactical-style options that would be great for home defense. The 870 tactical model comes with a bit of a shorter barrel and an extended magazine tube (both being future purchases I would like to make for my shotgun).

Both the shortened barrel and extended mag tube features on the tactical model would make it a bit easier to use in close quarters.

Something that makes buying the Remington 870 advantageous to you is the huge variety of aftermarket parts made for it. There is an incredible amount, giving you the ability to customize just about anything and everything on your 870 to your likes and needs, whenever your budget allows.

Some of the most popular upgrades would include Magpul furniture, like the Magpul forend, which I have installed on my 870. This gives you a better grip and also further ability to attach accessories and tools like a weapon mounted light.

The 870 comes chambered in both 12 and 20 gauge, giving you further options for what you would like. The normal express models come with a 4 shell capacity mag tube, giving you the capacity of 4+1.

The 870 has a long history of use in police departments across the nation, which is another sign that it is a great, reliable pump action shotgun.

The price point on the 870 falls below $400 on most of its models. This definitely makes it budget friendly, something that I needed when I bought my first gun.

The Remington 870 is an affordable, reliable, and all-around a great choice for a home defense option. When lives may be on the line, you want a shotgun that will perform and the 870 will give you peace of mind.

Semi-automatic shotguns have one large advantage over pump-action shotguns; they are much easier to shoot. Semi-automatics use the recoil from one shot to cycle the next shell into the chamber.

Semi-automatic shotguns give the user the ability to shoot faster and arguably more accurately because the felt recoil is actually lighter.

There are a lot of semi-automatic shotgun options out on the market. Some of the top models would include the Mossberg 930, the Browning A5, the Remington Versa Max and our top pick for the semi-automatic category, the Benelli M4.

The M4 gives a great combination of ease of use and durability that makes it a great shotgun for home defense. If you don’t want to worry about racking the slide on a pump action shotgun, something like the M4 might be for you.

The M4 comes standard with a pistol grip (which may or may not be for you, so make sure to give one a try before buying), an 18.5 inch barrel (which is ideal as far as defense shotguns are concerned) and a 5+1 capacity.Something to keep in mind when deciding between a pump action shotgun and the semi-automatic options listed above, a quality semi-automatic shotgun will likely be around $1,000 more than the pump-action price.

For me, this was definitely a deciding factor when I began my search for a shotgun. The price of most semi-automatics was far outside my personal price range for what I could afford. If this is the case for you too, the Remington 870 might be a better choice.

Final Thoughts: Which is Best Shotgun For Home Defense?

The Benelli M4’s semi-automatic features definitely give it a leg up when comparing it to the Remington 870. If you have the money, we suggest you go for that option. If you are on a budget, the Remington 870 is a great choice and I do not see it as completely inferior to semi-automatic shotguns. Like I said before, the 870 is a phenomenal shotgun, especially for the price.

Go for what fits your budget and your needs the best. We suggest the Remington 870, as this will fit fairly easily into most people’s’ budgets.

Get out there, get the best shotgun for home defense, and be prepared to help protect what matters most, where it matters most.