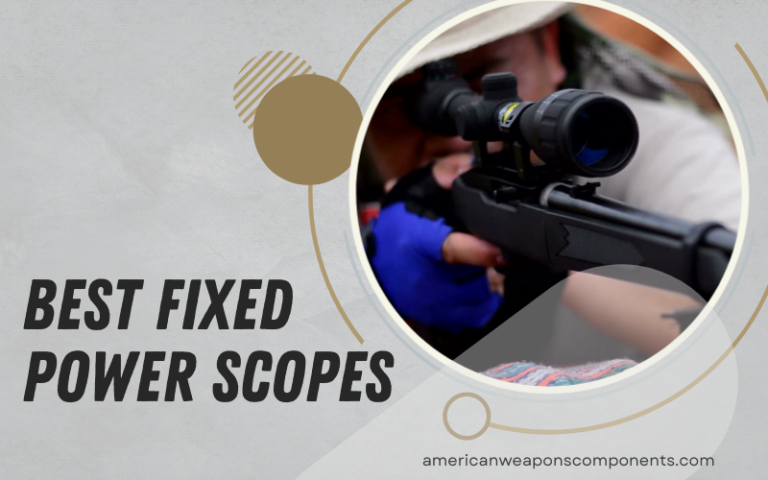 First things first. I know I’ve raved about variable magnification scopes before, but I felt compelled to branch out and mention the added durability and simplicity that comes along with a fixed power hunting scope.

I recently read a post on a hunting forum that basically said that you cannot hunt or shoot without a variable magnification scope. I completely and respectfully disagree. Yes, they allow you to magnify the image or intended target so that it appears to be closer however that added technology takes away from some of the other qualities of a rifle scope. What I mean by that is that if you have 2 scopes in your hand, let’s say a standard 3-9x40mm and a fixed power 4x-40mm at the exact same price range, the fixed 4x scope is probably built with better optics and is more durable than the 3-9x.

I am not going to be the guy to tell you that you must buy a fixed power scope for hunting, but I am only going to suggest that there are a lot of quality fixed powered scopes out there that will allow you to shoot varmint and even big game.

Variable magnification scopes are often larger and bulkier than their counterparts. In fact, some variable scopes look silly on a trim hunting rifle, not to mention the added weight and shier size that you are carrying around in the bush. If you are hunting in heavy bush, what are the chances that you are going to shoot a whitetail at 500 yards? If you are hunting in open plains or on a large field than I can relate to the fact that you need the additional reach that a variable magnification scope will provide.

As I have said before, if you are comparing a similar rifle scope of similar price, than I would almost guarantee you that the fixed power hunting scope will be made of higher grade material, will come with premium optics, and will be an all around better hunting scope.

For medium seized game hunting and even varmint hunting, a fixed power hunting scope will allow you to be accurate enough to kill your intended target, especially if you are hunting in a densely wooded area. If you zoom in to 9x or 19x, your field of view shrinks and we all know that. Like me, you have probably been in a similar circumstance where your scope was cranked up to 9x when you were hunting in the bush and you came across a whitetail not 100 yards away and by the time you had the deer in the field of view, it was gone.

One thing that my grandfather taught me that will always hold true – “A big scope will not always lead to a big shot.” It goes back to personal preference and fitting your hunting rifle with a suitable scope.

Bushnell’s Elite Tactical 10x40mm was developed for military and law enforcement worldwide and it built with optical precision and target turrets for fast acquisition. It has a wide field of view and also comes with multi-coated optics to ensure a crisp and clear image.

I have this Bushnell Elite fixed power scope mounted on my .308 and have it dialed in for 250-300 yard shots but I am sure I could reach out further if required. I would consider this my truck gun as I am easily able to jump out and make a quick kill shot at 200 yards without fooling with magnification rings. I find that the optics on this scope are much better for the money than I would get on similar priced riflescopes.

Leupold is a manufacturer that I can’t say enough about. Comparing their scope to another of the same price almost always means that Leupold has the advantage. The FX-II (or FX-2) in 4x32mm is one of the highest rated fixed magnification scopes on the market. It is a great all around scope and for udner $300 dollars, it is highly recommended in my opinion.

With a consistent 4″ of eye relief and 4x magnification, it is basically built for all applications. Whether you are big game hunting, punching targets at the range, or varmint hunting, the FX-II 4x33mm rifle scope is a great addition to any hunters gun rack.

Ok so I don’t normally formally review a scope for under $25 but I just had to with Aim Sport’s 4×32 Compact rifle scope. It is almost so cheap that it is worth anyone’s wallet to purchase one of these fixed magnification scopes for their rimfire. If I recall correctly, this was the first scope that I mounted on my son’s air rifle.

Now I won’t tell you that this is as good as any Leupold or Nikon on the market today, because that would be a lie, but I will say that this compact scope is better than shooting with iron sights. This is a great scope for anyone that has just purchased a rifle and doesn’t want to commit or doesn’t have the wallet for a $500 plus Leupold.

Fixed power rifle scopes are often overlooked because their counterpart being a variable magnification rifle scope has become so popular. Technology has come far enough to make variable magnification scopes affordable for the average hunter or shooter, however it is almost a guarantee that you can probably find a better quality fixed power scope in the same price range. No, these scopes won’t allow you to shoot at huge distances like a long range scope will, but they definitely have their purpose.

If you are looking for the BEST fixed power rifle scope for the money, then I would suggest you buy Bushnell’s Elite Tactical 10x40mm. It has insanely clear optics and has a decent field of view at 10x. With that in mind, if you are on a tight budget and this is one of your first rifle scopes, then give Aim Sport’s 4x32mm some thought. It continues to be one of the most frequently purchased rifle scopes on Amazon, and for good reason!